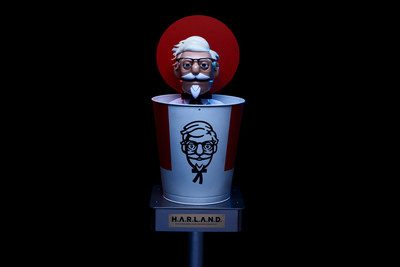 H.A.R.L.A.N.D. uses speech recognition, artificial intelligence technology and text-to-speech techniques to transform a KFC drive-thru operator’s voice into the unmistakable drawl of Colonel Sanders. Because H.A.R.L.A.N.D. repeats whatever the drive-thru operator speaks, customers can have unique and interactive conversations just as they would with the real Colonel Sanders.

The convenience of drive-thru service has been around for decades, and not much has changed…until now.

«We suspect drive-thru designers are heralding the H.A.R.L.A.N.D. technology as the greatest industry advancement since the addition of two-way communication itself. Not only do we have a real person as our historic brand icon, but now we have the ability to bring that real person back as a real robot. The future is now,» continued Felix.

The team at Funny Or Die recently demonstrated H.A.R.L.A.N.D.’s technological potential in this awe-inspiring video clip.

With more than 70 years of nothing-but-chicken expertise, KFC is the go-to destination for National Fried Chicken Day. Each year KFC sells approximately 400 million pounds of chicken in the United States, equivalent to 1.3 billion pieces. KFC cooks hand bread and freshly prepare chicken all day every day in every one of KFC’s nearly 4,200 restaurants across the U.S. Celebrate National Fried Chicken Day with KFC’s Extra Crispy chicken in a signature $5 or $20 Fill Up™.

To view the original version on PR Newswire, visit:http://www.prnewswire.com/news-releases/kfc-celebrates-national-fried-chicken-day-by-reinventing-the-drive-thru-experience-with-robot-colonel-harland-sanders-300484049.html