SHELBYVILLE, Ky., March 14, 2017 /PRNewswire/ — In 1987, the Bulleit Distilling Co. was founded by a young entrepreneur who quit his job as a lawyer to pursue his true passion – creating quality bourbon. Today, millions of cases of whiskey later, the Bulleit brand is proud to celebrate its 30th anniversary with the official ribbon cutting event for the opening of its new distillery in Shelbyville, Ky. Governor Matt Bevin and a number of other elected officials and dignitaries joined Bulleit Distilling Co. Founder Tom Bulleit for the festivities and tours of the new distillery. 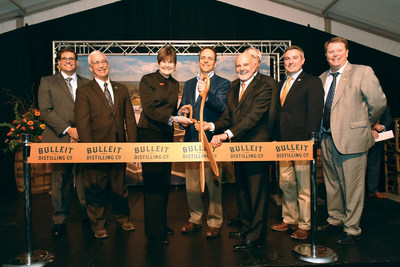 «We’re so proud to open the Bulleit Distilling Co. here in Shelbyville,» said Tom Bulleit. «Seeing this distillery come to life has been a truly surreal experience that couldn’t have been achieved without the tireless work of so many men and women. We can’t wait to share the delicious whiskey that will be produced here for centuries to come.»

Under the supervision of Vice President of Distilling, Pauline Rooney, the distillery employs approximately 30 people for the whiskey distillation and maturation processes. While the distillery is opening at the previously announced capacity of 1.8 million proof gallons annually it was built as a modular distillery and expansion opportunities are being explored.

«Today marks a huge achievement for Tom Bulleit and everyone at Diageo, as we open an amazing facility that will further establish the legacy of Bulleit here in Kentucky,» said Deirdre Mahlan, President of Diageo North America. «We look forward to continuing to watch the brand grow as we become part of the Shelbyville community.»

The distillery, which has already begun producing Bulleit Bourbon represents the latest technology in warehousing and distillation, including enhancements that help conserve and reuse resources, resulting in improved efficiency and less impact on the environment. The 300-acre campus includes four barrel houses (each capable of holding 55,000 barrels), a 52-foot still that was crafted by Vendome Copper and Brass Works in Louisville and the first industrial solar array in Shelby County, which will collect enough energy to run all on-site mobile equipment.

Diageo’s initial investment in building the distillery is $115 million for the Shelbyville site. Combined with the $18 million investment that was made to open the Bulleit Frontier Whiskey Experience at Stitzel-Weller, Bulleit has contributed more than $130 million to Kentucky’s economy since 2014.

«It is an honor to join Bulleit Distilling Co. today to celebrate the opening of its new distillery in Shelbyville,» Gov. Bevin said. «Bourbon, in addition to its status as a signature Kentucky product, is an important driver of state’s economy and workforce. Bulleit, which celebrates its 30th anniversary in conjunction with today’s ribbon cutting, continues to add international acclaim to Kentucky’s proud spirit-making tradition. I congratulate the company on these achievements and expect they’ll see continued strong growth in the coming years.»

Shelby County Judge-Executive Dan Ison says Bulleit is a valued partner. «From providing quality jobs, working with local farmers to buy corn and using byproduct for animal feed, to participating in our community, we are look forward to a bright future working together.»

«We are proud to have the Bulleit Distilling Co. call Shelby County home,» said Sen. Paul Hornback (R), Shelbyville. «The completion of the distillery shows, once again, that Shelby County is open for business. We congratulate Bulleit on this milestone and are excited to play a role in the new era of growth of the Kentucky bourbon industry.»

While the Bulleit Distilling Co. will not initially be open to the public, guests are invited to learn more about Bulleit and its family of whiskeys by visiting the Bulleit Frontier Whiskey Experience at Stitzel-Weller (3860 Fitzgerald Road, Louisville, KY 40216) on the Kentucky Bourbon Trail or going to www.bulleit.com.

As we celebrate the opening of the Bulleit Distilling Co., we hope fans of the brand will join us in raising a glass – responsibly, of course.

About the Bulleit Distilling Co.
The Bulleit Distilling Co. was founded in 1987 by Tom Bulleit, whose Bulleit Bourbon is inspired by a family tradition. Bulleit Rye, a straight rye whiskey, was added to the portfolio in 2011 to critical acclaim, and the brand’s third variant, Bulleit Bourbon 10-Year-Old, was introduced in 2013. Bulleit whiskeys use a higher proportion of rye grain, which gives them their distinctive bold, spicy taste. Bulleit ranks as one of the fastest-growing whiskeys in America, which Tom largely credits to word of mouth recommendations. In 2014, Bulleit broke ground on a new $115 million distillery located in Shelbyville, Ky. The Bulleit Distilling Co. opened in March 2017. Guests are invited to learn more about the past, present and future of Bulleit by visiting the Bulleit Frontier Whiskey Experience at Stitzel-Weller in Louisville, Ky., a member of the Kentucky Bourbon Trail® tour. For more information, visit www.bulleit.com.

About Diageo
Diageo is a global leader in beverage alcohol with an outstanding collection of brands including Johnnie Walker, Crown Royal, Bulleit and Buchanan’s whiskies, Smirnoff, Cîroc and Ketel One vodkas, Captain Morgan, Baileys, Don Julio, Tanqueray and Guinness.

Diageo is listed on both the New York Stock Exchange (DEO) and the London Stock Exchange (DGE) and our products are sold in more than 180 countries around the world. For more information about Diageo, our people, our brands, and performance, visit us at www.diageo.com. Visit Diageo’s global responsible drinking resource, www.DRINKiQ.com, for information, initiatives, and ways to share best practice. 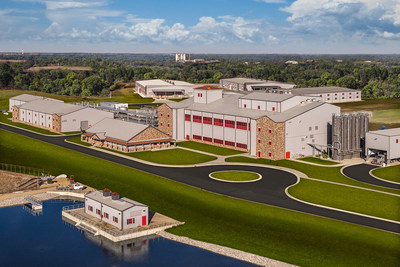 To view the original version on PR Newswire, visit:http://www.prnewswire.com/news-releases/bulleit-distilling-co-celebrates-ribbon-cutting-event-at-new-distillery-in-shelbyville-ky-300423493.html